It's the time of year when you look at the garden, make resolutions about what to do differently next year- then forget to make a note about it. The result is that you make the same mistakes next year. Or is that just me?

Here goes on some thoughts about White Moss House garden 2015. It's a Grasmere garden, a Lake District garden , so the thoughts below may not apply to gardens elsewhere.

Two things are totally out of my control

1. The weather. It's been cold, dull and wet. You know that- we all know that.

2. Rabbits. We've not had rabbits for years, but in the past two weeks we've seen two. They've eaten the annual cornflowers which I sowed with love, and which were finally beginning to flower well. They've also eaten the Nigellas which had been beautiful. The nasturtiums are another target, and they've even bitten through the stem of a Japanese anenome leaving the stalks with flowers lying on the ground.

Of course, you might say that I can do something about the rabbits. Get someone to lurk around with a shotgun would be top of my list right now as I'm so fed up with them, Is that legal? Failing that, over the winter we'll have to dig in a rabbit fence around the main beds. We used to have these years ago, but as we've been rabbit free they've all be taken down.

Here's a photo of the border taken early August.

The penstemons planted from plugs in 2014 are looking good, and the mesembryanthemum that I bought from the WI market in 2014 is doing really well. I divided it into 3 clumps and each is flowering well ( it's the lilac coloured flower) Also, an erodium I bought last year from the WI market has been brilliant. I divided this into 3 as well, and it's been a really good colour source all through the summer. It tends to be a bit leggy, and I've realised that you need to cut the leaves off from below as they die. It's a member of the storksbills, a relative of the much loved cranesbills.

When it started to flower in June I wasn't sure of it's name. In the end, I described it to the lady at the WI market, from whom I'd bought I bought it last year. "Erodium"- flowers all summer, just keep deadheading.

Here's a picture of it taken early in June.

Just a few more thoughts today, looking at the flowers above.

Plugs- don't bother with them ever again! Yes, I do still have a good showing of the Pentsemons, but I'd rather buy 6 larger good quality plants than fuss around with 24 plugs that need repotting. This is just my opinion. Nothing against Thompson and Morgan who sent excellent plugs.

Final thought today, memo to self. Next year, don't both to sow seeds in seed trays and then plant out. Those sown directly into the border did just as well.

That's enough for one day. Back soon with more memos- mostly for me, but if they help you, you're welcome.

How could I make such a mistake- I watch Monty Don every week!

I've decided to grow my bedding plants from seed this year. That's what being (semi) retired does to you - well to me anyway.

On a glorious sunny day last week I sowed Cosmos, Nigella, Zinnia and Cornflowers into seed plug trays ( a bargain at Hayes , £1.99 for 5 trays of 40 plugs).

I sowed,and then I wrote labels, just like Monty, ("always make sure you label your seeds") and stuck the labels in the seed trays. I made the labels from shiny cardboad, and wrote them with a felt pen.

3 days later, I have seedlings already- fantastic! The only problem is that the labels are now damp, the ink has run, and I don't know what's what.

I think the first seedling to show are Cosmos. I grew Cosmos from seed last year, as I struggle to find the bedding plants  locally and they tend to be quite expensive. They were brilliant. So easy, so impressive. If I'd known years ago how easy Cosmos was to grow from seed ............ but then every gardener always has regrets don't they?

Here a picture of Cosmos in my Lake District garden last year.


If you can't get down to your garden centre you can buy seeds online from Amazon. Here's the link for UK readers

Readers in the USA and Canada can buy Cosmos seeds via this picture link.
Posted by Sue Dixon at 13:26 No comments:

Now is the time to plant Lovage

Do you have lovage in your garden? If not, now is the time to sow seeds. In a few weeks you'll be able to buy lovage plants ready to go straight into the garden.

Here's an article I've written about Lovage- how to grow and use the Lovage herb.

If you visit it please leave a message.

Do you love lovage? It tastes rather like celery, it's easy to grow, you can use it all summer in salads and recipes, and it looks pretty too.

Here's a picture of lovage in my herb garden.

Email ThisBlogThis!Share to TwitterShare to FacebookShare to Pinterest
Labels: lovage

The sorrel is just appearing, but no sign yet of lovage.

At this time of year I'm checking the herb garden to see if any fresh herbs are on their way.

The tiniest shoots of sorrel are just peeping through, but there is no sign yet of  the lovage . If you click on the links, you'll find lots of reasons to grow these two great herbs.

These two herbs are easy to grow, and as they are not often found in shops, it makes sense to grow your own. Now is the time to sow! You can buy seeds from Amazon.

Last year I took a few snaps whilst on my favourite short walk. White Moss House to Brockstone holiday cottage, left past White Moss tarn, down to the duck pond above Dove Cottage, then left back along the old road , past Mark the ice cream man ( stopping for a chat), and back to White Moss House.

I took some photos of the local gardens. Here's one of them. For more photos you can click through to my new Grasmere holiday cottage website.

The herb garden is looking good already, and the sweet cicely is ready for the rhubarb.

With a warm winter and spring, our herb garden is already offering a good choice of fresh herbs. Whenever we cook, we just pop out of the back door and pick whatever seems to fit the meal.

Now that the nights are light it's even easier. No need for blind picking when there isn't a torch to hand. Right now I've got lovage,  sweet cicely,  sorrel, mint, peppermint, rosemary, thyme, sage, fennel and marjoram all at hand. Don't think that because you live in the North of England, in a cool , damp climate, you can't grow herbs. You can. We do!

The thyme and rosemary is actually in a pot, which I've kept under the eaves out of the worst of this winter's rain. In past years I've lost the thyme and rosemary, as they hate having their roots permanently wet. This year they're as happy as the proverbial Larry.

Hers a picture of sweet cicely in our White Moss herb garden. It will be a week or so before it's as high as this, but the great thing is that there is enough leaf now to add to the wonderful fresh new rhubarb that's in the shops. The sweet cicely cuts the sharpness of the rhubarb, so you don't need so much sugar. Grow sweet cicely and keep the calories down. Add it to fruit dishes and halve the sugar. That's Herb Magic.
Speaking of Herb Magic, here's a book for herb fans that's on my wish list.

Do you love to write? Why not try Wizzley? 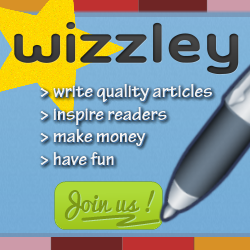